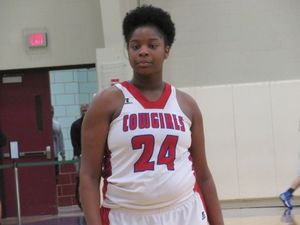 Hammond Star – The 7th annual Allstate Sugar Bowl National Prep Classic tipped off Wednesday at the Alario Center in Westwego with four boys games and it was the girls’ turn to take the court on Thursday. Three local girls teams are participating in the tournament with Loranger and Sumner competing in the Platinum bracket while St. Thomas Aquinas is slotted in the Gold Bracket.

Both Sumner and St. Thomas Aquinas were in last year’s tournament and the Cowgirls won the Gold Bracket championship with a 54-40 win over Covington. The defending Class 3A state champions were hoping for a similar result Thursday against Ellender but the Lady Eagles got the upper-hand with a 55-45 victory.

St. Thomas Aquinas fell in the second round of last year’s tournament and opened this year’s Classic with a matchup against Woodlawn-Baton Rouge late Thursday night. Meanwhile, Loranger had intentions of keeping its unbeaten record against in-state opponents in tact and that was no easy task against Karr.

The Lady Wolves previously beat the Cougars 87-62 at home on December 1 but found themselves in a nail-biter throughout most of Thursday’s matchup. Loranger led by as much as 12 early in the fourth quarter but Karr went on an 11-4 run to pull within 62-60 with just over a minute left in the game.

The Cougars had a chance to tie or take the lead with 19.1 seconds left but a coast-to-coast layup attempt by Rikianne Patterson was just off target and Loranger senior Anna White was fouled after the Lady Wolves corralled the rebound. She made the first of two free throws and Desrael Schnyder rebounded the miss to seal a hard-fought 63-60 win for the Wolves.

Loranger moved to 11-0 against in-state competition with the win and will face the winner between Madison Prep and Curtis Friday at 5:30 p.m. in the quarterfinals. The Lady Wolves were coming off a 2-1 showing in the Naples Holiday Shootout in Florida last week and coach Sean Shields wasn’t particularly pleased with his team’s play on Thursday.

“The trip was beneficial but only if you use it as a stepping stone to create momentum,” Shields said. “It’s almost like ‘ok, we came back from Naples and now we’re just back in state.’ But some of these teams that are here are just as competitive if not more competitive than the last two teams we played. We’ve just got to get it out of our heads that we played in a national tournament and now we’re back home (and it’ll be easy). That’s just ridiculous and completely immature.”

Perhaps the Wolves were still in a bit of a malaise after the trip to Florida, maybe they took the Cougars a bit lightly after handling them so easily in December or maybe Karr was determined to have a better showing. At any rate, Loranger certainly had to work for Thursday’s win and they got big performances from Mya Young and Sydney Rivers to put them over the top.

Young was the team’s leading scorer with 24 and Rivers finished with 15. Schnyder also chipped in with 12 points and was Lady Wolves’ top rebounder with 10. Karr senior Destiny Collins, a Nicholls signee, was the game’s high scorer with 28 points plus nine rebounds. Loranger also got a bit of a boost with the return of point guard Carley James, who tore her ACL during the summer, but came off the bench to add two points with a pair of steals.

While Loranger added a big piece to their team with the return of James, Sumner is on the other end of the spectrum. The Cowgirls played their first game without senior point guard Kiara Williams, who tore her ACL in Sumner’s matchup against Parkview Baptist on December 20. Sumner certainly missed the presence of its primary ball handler and a flurry of turnovers led to a 36-26 third quarter lead turning into a 10-point defeat.

“We had six practices to try and prepare without her and it was tough,” Cowgirls coach Kara Corkern said. “Our other guards are a lot younger and we just didn’t have the experience (to handle the pressure). We led the whole game but right at the end, our momentum fell and that was the difference.”

ULM signee Diamond Brooks was dominant for the Cowgirls putting up game-highs in points and rebounds with 25 and 12. Freshman center Tykayla Robertson added eight points and junior Amya Brumfield finished with six points, eight rebounds and seven assists. Sumner moves to the consolation bracket with the loss and their next matchup will tip off Friday at 5:30 p.m.