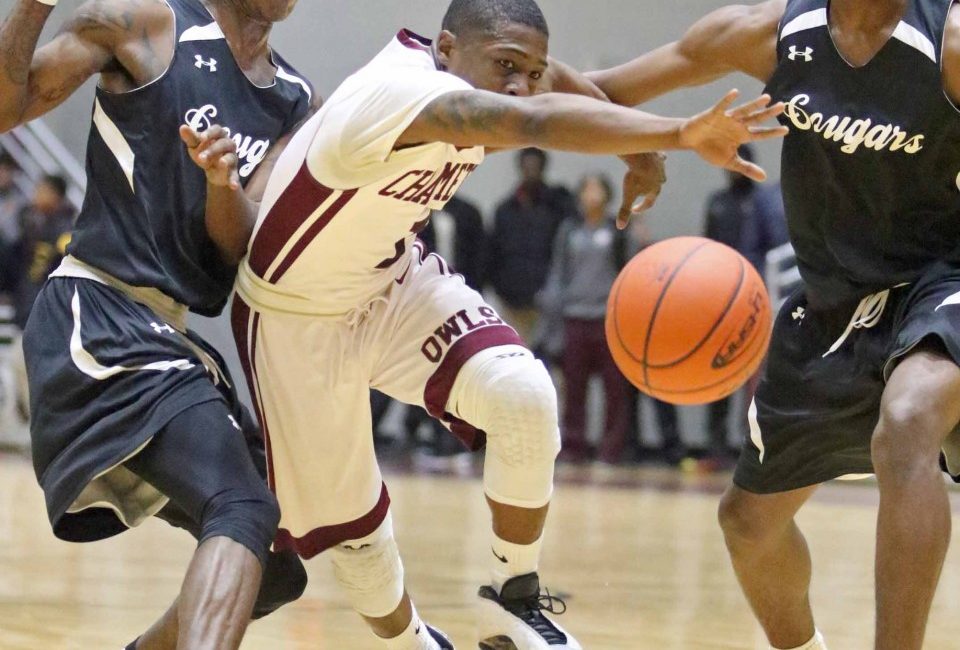 Chalmette guard Cartlon Campbell (1) loses control of the ball while being defended by a pair of Kingwood Christian players during the Allstate Sugar Bowl National Prep Classic at the Alario Center in Westwego on Friday, January 6, 2017. (Photo by Peter G. Forest)

HOW IT WAS WON

In a game that was never separated by more than five points throughout the first 26 minutes, Christian Life went on a 7-0 run to open the fourth quarter and held on despite a valiant Chalmette comeback effort and a show by Owls center Mitchell Robinson.

Nicolas Elame hit a short bucket to give the Cougars a 56-47 lead with 2:40 to play, and it seemed like that was game, set, match. But the Owls never quit, and after Carlton Campbell and Marlon Decoud hit 3-pointers – the last one coming with 32 seconds remaining, the lead was trimmed to 56-53.

A lane violation on Christian Life before Sunny Ozoh ever took the first shot of a 1-and-1 with 15 seconds remaining gave Chalmette one more chance. But Glenshaw Amos’ 20-footer hit off the front rim, bounced off the back rim and the buzzer sounded to end it.

Throughout the game, Robinson had some crazy dunks, and hit a 3-pointer from about 23 feet, as well. He was 10-of-17 from the field to finish with a game-high 23 points to go with nine rebounds, four blocks and two steals.

Chalmette coach Butch Stockton: “They battled hard all the way through until the end. When you fight, you give yourself a chance to win at the end of the game, and I am very proud of them. Playing a game like this, you learn how to control the basketball. They have some really good shot blockers on that team (eight blocks), but our kids didn’t get intimidated. I also thought we played excellent defense. We created a couple of turnovers and gave ourselves a chance.”